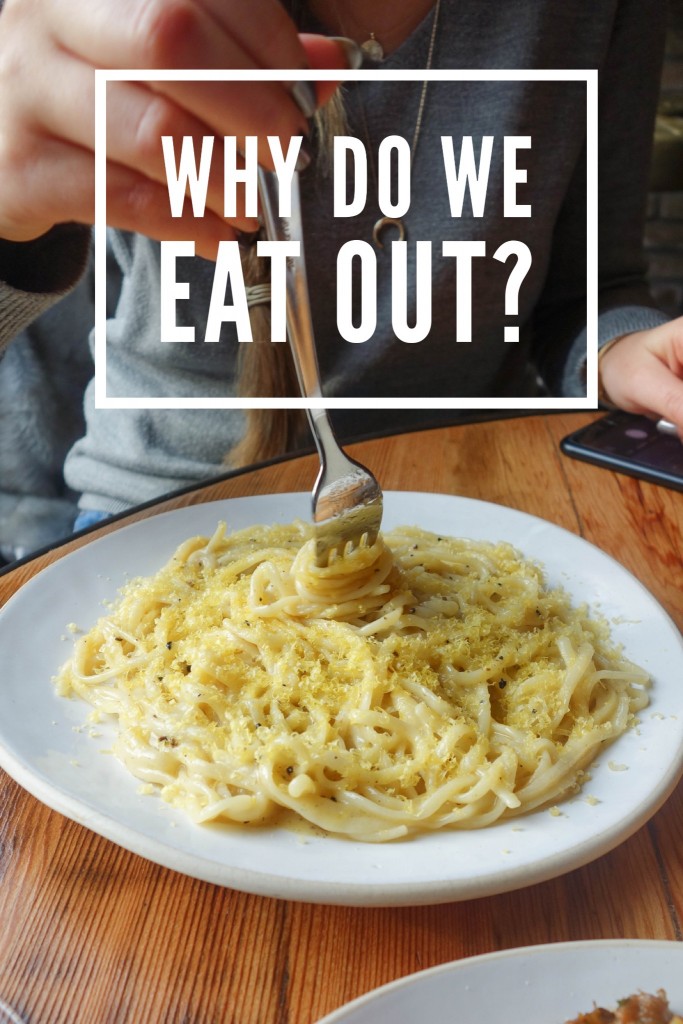 It may seem like an obvious question, but why do we eat out? Think about it. Why do YOU eat out? Why do you choose to pay for a meal at a restaurant, café or bar when you could easily cook for yourself at home or stick something in the microwave? Interesting isn’t it. The more I thought about it, It became clear there’s a lot more to it than the immediate thought of ‘because we’re hungry.’

Food is a whole culture in itself and as with any religion or interest, people have their own reasons for doing it (Yes I did just liken food to a religion). There are obvious ones such as convenience and necessity; We have to eat, we can’t be bothered to cook or simply because it’s easier if we’re on our way out somewhere but why we choose to eat out when we don’t NEED to, well, that’s another thing entirely.

If you have read my article called ‘Great Food or Good Service – Which One is More Important?’ you’ll remember how I raised the point that when it comes to eating out some would say the food is actually secondary to the experience. The sights, the entertainment, the social element; these are all reasons we visit other than just to eat. How many times have you said to someone “let’s go for dinner” without having a place in mind? A lot of the time it doesn’t really matter where you go it’s just the act of the thing itself. That raises the question of how important is the ‘eating’ part when we eat out?

London, for example, has a food culture all of its own and eating out is a way of life in the capital not like I’ve seen anywhere else in the world. It’s the norm to be out on a random Wednesday night getting stuck into a pizza or stopping for some sushi on your way home cos’ you can’t be bothered to cook. As well if you’re not meeting for brunch on a weekend morning then what are you doing with your life! Of course, I’m kidding but sometimes it does feel that way. It’s become such an integral part of the ‘big city life’ just like it has to get angry at the people who walk slowly on Oxford Street. (Yes, I’m an angry Londoner!) Does this theory ring true for similar places like New York and Paris? Yes, I think it does.

Having lived in Wales for 21 years, I feel like I’ve seen the other side of this too where communities are smaller, life is a bit less hectic and food is more of a necessity rather than an experience. A sweeping generalisation here but eating out is mostly done on weekends and special occasion and is seen as a real treat rather other than ‘I just fancied it.’ Having considered this you could argue that dining out more often in bigger cities is because of typically higher wages and therefore people have a more disposable income? Something to think about.

So, why DO we eat out? The simple answer is because we WANT to. Because it’s an escape from everyday life, because it’s the chance to catch up with a friend, because we simply love the whole experience food brings us. I do eat out because I want to try a new place or a new dish on a menu but mostly I go for the experience (not to mention so I hate washing up) There’s nothing I love more than heading to a new part of town, sitting down with a friend and enjoying a meal together. In fact, it’s my favourite thing to in the whole world. So, next time you make dinner plans, ask yourself the question. You might be surprised that the answer isn’t very straightforward.